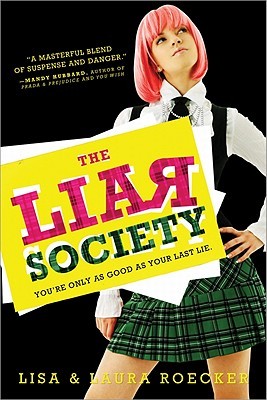 Kate Lowry didn’t think dead best friends could send e-mails. But when she gets an e-mail from Grace, she’s not so sure.

Now Kate has no choice but to prove once and for all that Grace’s death was more than just a tragic accident. But secrets haunt the halls of her elite private school. Secrets people will do anything to protect. Even if it means getting rid of the girl trying to solve a murder…

The Liar Society is a dark but enjoyable prep school murder mystery that reminded me a bit of a mix between Pretty Little Liars and The Disreputable History of Frankie Landau-Banks. Its many twists and turns kept me guessing throughout the course of the story, and definitely intrigued me enough to pick up the sequel.

The Liar Society takes place at a prep school called Pemberley Brown, which is one of the main reasons I wanted to read it; I’ve always been a little bit sad that I was never able to go to a prep school, despite the number of times my mother threatened to send me away to boarding school when I was younger. Pemberley Brown is filled with Latin phrases, secret tunnels, “stations,” traditions, and, best of all, secret societies, making it the perfect setting for the story.

It was a lot of fun exploring the school grounds with our protagonist, Kate. She’s sarcastic, snarky, and awkward at times, adding just the right touch of humour to such an otherwise dark novel. She’s consumed with guilt from Grace’s death and possesses a strong sense of justice. While she doesn’t always make the smartest decisions, I found myself rooting for her to both solve the mystery and work her way back to “normal Kate.”

The mystery itself was really well executed. Flashbacks to the night when Grace died were interspersed throughout the story, adding just the right amount of suspense and intrigue to keep you guessing at what could have happened. I had managed to predict some of the twists in the plot but not all of them, and just when I thought I had pieced everything together, another clue would appear that would cause me to second guess everything (and everyone). As with all good mysteries, the truth is buried under layers and layers of secrets, and it was so much fun trying to uncover them all with Kate.

Overall, The Liar Society was a fast-paced, captivating mystery that will keep you guessing until the very end.