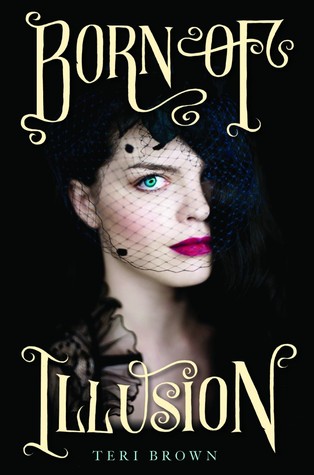 Anna Van Housen has a secret.

A gifted illusionist, Anna assists her mother, the renowned medium Marguerite Van Housen, in her stage show and séances, easily navigating the underground world of magicians, mediums, and mentalists in 1920’s New York. As the illegitimate daughter of Harry Houdini—or so Marguerite claims—sleight of hand illusions have never been a challenge for Anna. The real trick is keeping her own gifts secret from her opportunistic mother. Because while Marguerite’s own powers may be a sham, Anna possesses a true ability to sense people’s feelings and foretell the future.

But as Anna’s powers intensify, she begins to experience frightening visions of her mother in peril, which leads her to explore the powers she’s tried so long to hide. And when a mysterious young man named Cole moves into the flat downstairs, introducing Anna to a secret society that studies people with gifts like hers, she is forced to confront her past and rethink everything she’s ever known. Is her mother truly in danger, or are Anna’s visions merely illusion? And could the great Houdini really be her father, or is it just another of Marguerite’s tricks?

From Teri Brown comes a world bursting with magic, with romance, and the temptations of Jazz Age New York—and the story of a girl about to become the mistress of her own destiny.

I’m a huge fan of books set during the Roaring Twenties, and Born of Illusion is no exception. Between séances, spiritualism, magicians, and prohibition, I absolutely loved the historic New York City atmosphere.

Anna Van Housen is such an easy character to love. Although she hasn’t had the easiest or most traditional life, she’s such a strong, competent young lady, and her passion for magic shines through her every action. She refuses to let her work be devalued because of her gender, and struggles to find her own place in the world.

The relationship between Anna and her mother was beautifully portrayed, despite how frustrating it was at times. While often characterized by jealousy and petty manipulations, Anna’s mother does truly love her – something that Anna discovers slowly over the course of the book, and that served to redeem her mother a bit in my eyes.

The secondary characters, too, become rounded out over the course of the story. As Anna overcomes her initial judgments and reservations, she builds forms close friendships and learns that not everyone is quite how they first appear. Mr. Darby, in particular, surprised me in his transformation from crotchety old man to surprisingly fun neighbour.

There was a touch of romance in Born of Illusion, however it took a backseat role to the magic and mystery in the main plot. The two suitors that vie for Anna’s attention are polar opposites, although it was rather easy to determine which one would be chosen.

My main complaint about Born of Illusion is that the mystery was a bit too predictable. I also would have liked more scenes with magic/séances, as those scenes were incredibly well written and creative, and a few more answers regarding Anna’s magic and Houdini. But I suppose that’s what a sequel is for.

Overall, Born of Illusion was an intriguing mix of paranormal and historical fiction that I thoroughly enjoyed. I can’t wait to read Born of Deception – especially if what I’ve heard about it involving Rasputin is true.

2 thoughts on “Book Review: Born of Illusion by Teri Brown”