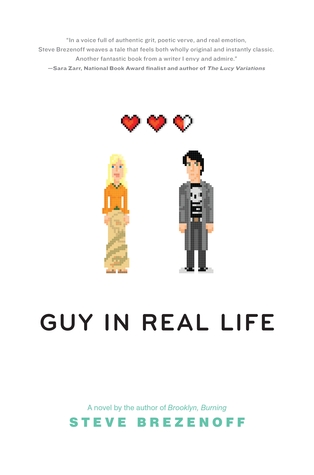 It is Labor Day weekend in St. Paul, Minnesota, and boy and girl collide on a dark street at two thirty in the morning: Lesh, who wears black, listens to metal, and plays MMOs; and Svetlana, who embroiders her skirts, listens to Björk and Berlioz, and dungeon masters her own RPG. They should pick themselves up, continue on their way, and never talk to each other again.

This is a story of two people who do not belong in each other’s lives, who find each other at a time when they desperately need someone who doesn’t belong in their lives. A story of those moments when we act like people we aren’t in order to figure out who we are. A story of the roles we all play—at school, at home, with our friends, and without our friends—and the one person who might show us what lies underneath it all.

I’m honestly not sure what to make of Guy in Real Life. On one hand, it’s a love story between two teens who couldn’t be more different; on the other, it’s a complex examination of societal paradigms, especially those relating to traditional gender roles.

Guy in Real Life is told from several POVs: not only do we get to hear from our two protagonists, Lesh and Svetlana, but the perspectives of in-game avatars are also present, adding to the uniqueness of the story.

I absolutely loved the way that Guy in Real Life portrayed the gaming world. Dungeons and Dragons gets such a bad reputation in many social circles, but Guy in Real Life did a wonderful job of showing just how much creativity and thought is put into each game. And I was pleasantly surprised by how much of the “gaming lingo” I still understood – it definitely brought back memories of my Runescape playing days!

While the friendship between Lesh and Svetlana was innocent and slow to build, their relationship didn’t feel authentic to me. From the first meeting, which set Svetlana up to be a manic pixie dream girl, Lesh becomes obsessed with her. She’s placed on a pedestal, and is constantly in his thoughts – to the point where he creates an online character in her likeness. That’s not to say that it wasn’t sweet at times, but this borderline-instalove made it difficult for me to fully support them as a couple.

My favourite part of Guy in Real Life, though, is the discussion on societal roles and how hard it can be to find your identity. The roles that we play can either strengthen us or increase our self-doubts, as Lesh shows time and time again. While I may not agree with the way that it was resolved, I definitely liked the message behind it.

Overall, Guy in Real Life was an entertaining read that was so much more than the “slice of life” story that I expected. While it isn’t a book that I could see myself re-reading, I wouldn’t be surprised if it made its way into many other readers’ hearts (and bookshelves).