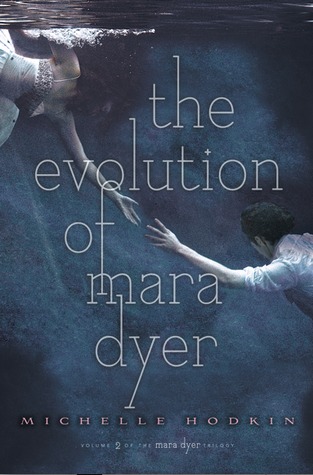 Mara Dyer once believed she could run from her past.
She can’t.

She used to think her problems were all in her head.
They aren’t.

She couldn’t imagine that after everything she’s been through, the boy she loves would still be keeping secrets.
She’s wrong.

In this gripping sequel to The Unbecoming of Mara Dyer, the truth evolves and choices prove deadly. What will become of Mara Dyer next?

“They rattled my cage to see if I’d bite. When they released me, they’d see that the answer is yes.”

Although there were many elements of The Unbecoming of Mara Dyer that I didn’t enjoy, that awful cliffhanger ending made it so that I just had to pick up The Evolution of Mara Dyer. And, thankfully, it was a much better read.

The Evolution of Mara Dyer is much more plot-focused than romance-driven, allowing for a plethora of creepy scenes and paranormal occurrences. Between creepy dolls, crows falling from the sky, and threatening messages written in blood, it’s easy to see why I was completely absorbed in the story. My only complaint is that, at times, there seemed to be too much plot, causing the story to feel drawn out over its 500+ pages. The twist at the ending was also painfully obvious, and wasn’t quite as good as what I had imagined, but the intense cliffhanger ending kind of made up for that.

Unreliable narrators are my favourite, and Mara is no exception. Over the course of the story, readers aren’t exactly certain what is truly happening and what is just in Mara’s head – and that just makes it all the more interesting.

I was surprised to find that I actually really enjoyed the relationship between Mara and Noah this time around, mostly because it was a portion of a plot instead of the main focus of the novel. Noah has shown tremendous character growth, and is clearly good for Mara – he truly cares about her, and often is what grounds her in reality. I loved how willing he was to help her; I just wish that his help didn’t always involve throwing money at the problem.

Overall, despite its flaws, I can’t wait to continue this series. Even if it does mean painfully waiting until November for The Retribution of Mara Dyer to finally be released. (Seriously, someone should have warned me about that before I binge-read the first two books…)