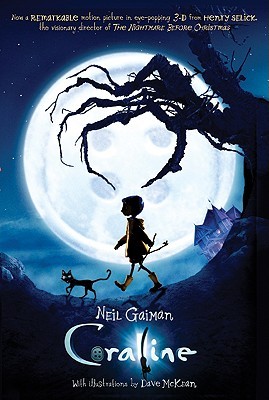 “Coraline discovered the door a little while after they moved into the house. . . .”

When Coraline steps through a door to find another house strangely similar to her own (only better), things seem marvelous.

But there’s another mother there, and another father, and they want her to stay and be their little girl. They want to change her and never let her go.

Coraline will have to fight with all her wit and courage if she is to save herself and return to her ordinary life.

“When you’re scared but you still do it anyway, that’s brave.”

Coraline is a book that would have terrified me when I was younger. From Other Parents with buttons for eyes to rats that sing creepy songs, I’m positive that it would have given me nightmares. Even though I’m slightly older than the target age range for this middle grade story, I’m pleased to say that this spooky read was still thoroughly enjoyable.

Coraline Jones is someone I would love to go exploring with, since she’s curious, intelligent, adventurous, brave, and a little bit reckless. As she faces her fears in the Other world, Coraline learns some very important lessons: that getting everything you want isn’t as fun as you’d think, and that you should be careful what you wish for.

The illustrations included in the Coraline are beautiful and haunting, adding to the atmosphere of the story. My only complaint is that the story felt rather short; including the illustrations and notes from Neil Gaiman on his writing process (which are incredibly interesting to read!), it only took me a couple of hours to read the 160 pages. Although I’m quite happy with the way that it was told, I would have loved to further explore the Other world and its origins… perhaps in a sequel or companion story?

Overall, Coraline mixes a rather dark storyline with the whimsical nature of children’s literature, making for a wonderfully spooky read.