This week, I’m waiting on We Are Pirates by Daniel Handler, which has an expected publication date of February 3, 2015. 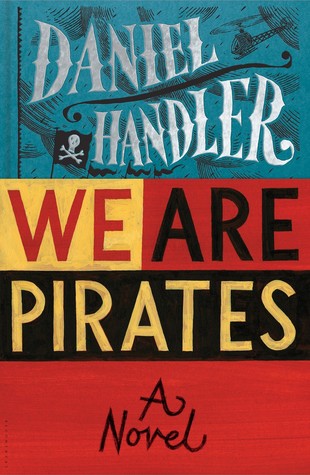 Mega-bestselling author Daniel Handler (aka Lemony Snicket) gives us his long-awaited and most ambitious novel yet: a dark, rollicking, stunningly entertaining human comedy.

A boat has gone missing. Goods have been stolen. There is blood in the water. It is the twenty-first century and a crew of pirates is terrorizing the San Francisco Bay.

Phil is a husband, a father, a struggling radio producer, and the owner of a large condo with a view of the water. But he’d like to be a rebel and a fortune hunter.

Gwen is his daughter. She’s fourteen. She’s a student, a swimmer, and a best friend. But she’d like to be an adventurer and an outlaw.

Phil teams up with his young, attractive assistant. They head for the open road, attending a conference to seal a deal.

Gwen teams up with a new, fierce friend and some restless souls. They head for the open sea, stealing a boat to hunt for treasure.

We Are Pirates is a novel about our desperate searches for happiness and freedom, about our wild journeys beyond the boundaries of our ordinary lives.

Also, it’s about a teenage girl who pulls together a ragtag crew to commit mayhem in the San Francisco Bay, while her hapless father tries to get her home.

I absolutely love A Series of Unfortunate Events, so I’m naturally excited for We Are Pirates – even if it’s targeted at a slightly older age group. And if the pirates are anything like Hook from Once Upon A Time, I’ll be quite satisfied with it.