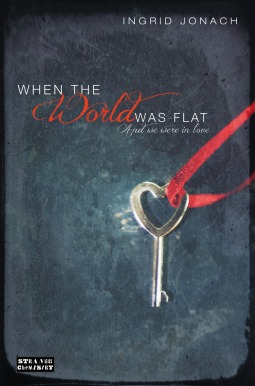 Looking back, I wonder if I had an inkling that my life was about to go from ordinary to extraordinary.

When sixteen-year-old Lillie Hart meets the gorgeous and mysterious Tom Windsor-Smith for the first time, it’s like fireworks — for her, anyway. Tom looks as if he would be more interested in watching paint dry; as if he is bored by her and by her small Nebraskan town in general.

But as Lillie begins to break down the walls of his seemingly impenetrable exterior, she starts to suspect that he holds the answers to her reoccurring nightmares and to the impossible memories which keep bubbling to the surface of her mind — memories of the two of them, together and in love.

When she at last learns the truth about their connection, Lillie discovers that Tom has been hiding an earth-shattering secret; a secret that is bigger — and much more terrifying and beautiful — than the both of them. She also discovers that once you finally understand that the world is round, there is no way to make it flat again.

An epic and deeply original sci-fi romance, taking inspiration from Albert Einstein’s theories and the world-bending wonder of true love itself.

When the World Was Flat (and we were in love) was one of my more anticipated reads of 2013. Between the lovely cover, the intriguing title, and a synopsis that promised me a science fiction story based on actual theories, I was certain that this would become one of my new favourite stories… but, unfortunately, it fell rather flat and I was not in love with it.

I wasn’t enamored with any of the characters in this book. None of their relationships were really developed that much, and were instead defined by labels that our judgmental main character, Lillie, doled out: there was Sylv, the slut (and while they didn’t come right out and call her that, they definitely frowned upon her sexual freedom); Jo the tomboy; Melissa, the popular mean girl; and Lillie’s absent mother. The only one to escape this labeling was Tom, but he also came across as rather one-dimensional.

The relationship between Tom and Lillie seemed to cover almost every cliche in today’s YA scene: a mysterious, hot, new boy takes interest in a girl with self-esteem issues, they have a connection that can’t be explained, and all of a sudden they’re in love / soulmates . Their relationship really wasn’t developed very well – just like all of Lillie’s other relationships – so by the time that the “big reveal” of why Lillie was drawn to Tom came about, I didn’t care enough to be surprised or intrigued.

My main problem with this book, however, was the lack of science fiction aspects. Parallel dimensions and string theory were discussed at times, but the main focus of the book seemed to be the instalove-fueled romance between Tom and Lillie. As a result, I was left with more questions than answers in regards to many of the scientific theories mentioned: if a decision can cause a parallel universe to form where you chose to do the opposite thing, does this happen with all choices? If not, how do you know which choices will do this? If every scenario has multiple potential outcomes, does that mean that there is an infinite number of parallel universes? And so on. I would love to say that all of these were touched upon more than once – and during an infodumpy conversation between Lillie and Tom, of all places – but since the scientific theories fell to the wayside once the romance began, many of them were left unanswered.

Overall, When the World Was Flat (and we were in love) was a huge disappointment. It held my interest just enough to keep me from marking it as a dnf, even though I was tempted to on many occasions.