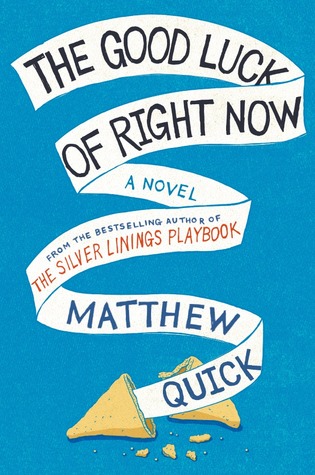 Call it fate. Call it synchronicity. Call it an act of God. Call it . . . The Good Luck of Right Now. From the New York Times bestselling author of The Silver Linings Playbook comes an entertaining and inspiring tale that will leave you pondering the rhythms of the universe and marveling at the power of kindness and love.

For thirty-eight years, Bartholomew Neil has lived with his mother. When she gets sick and dies, he has no idea how to be on his own. His redheaded grief counselor, Wendy, says he needs to find his flock and leave the nest. But how does a man whose whole life has been grounded in his mom, Saturday mass, and the library learn how to fly?

Bartholomew thinks he’s found a clue when he discovers a “Free Tibet” letter from Richard Gere hidden in his mother’s underwear drawer. In her final days, mom called him Richard—there must be a cosmic connection. Believing that the actor is meant to help him, Bartholomew awkwardly starts his new life, writing Richard Gere a series of highly intimate letters. Jung and the Dalai Lama, philosophy and faith, alien abduction and cat telepathy, the Catholic Church and the mystery of women are all explored in his soul-baring epistles. But mostly the letters reveal one man’s heartbreakingly earnest attempt to assemble a family of his own.

A struggling priest, a “Girlbrarian,” her feline-loving, foul-mouthed brother, and the spirit of Richard Gere join the quest to help Bartholomew. In a rented Ford Focus, they travel to Canada to see the cat Parliament and find his biological father . . . and discover so much more.

Our protagonist, Bartholemew Neil, is a 38 year old man who lives in a codependent relationship with his mother, keeps a journal of interesting things, and is in love with a Girlbrarian that he’s never spoken to. And he may be borderline autistic (though it was never explicitly confirmed). After his mother dies from cancer, his therapist, Wendy, advises that he make like a little bird discovering independence, and with the help of Richard Gere, a foul-mouthed man who loves cats, the Girlbrarian, and an ex-priest, he’s able to find his flock. This rag-tag group of characters was incredibly quirky, and yet Quick was still able to make me care about them – both because of their incredible strangeness and their normalcy.

Although The Good Luck of Right Now contains many difficult subjects (such as abuse and loss of a loved one), it is also incredibly uplifting. Despite his poor circumstances, Bartholemew is still able to see the good in people and selflessly offer his assistance, and even his home, to those in need. The idea of synchronicity – or “the good luck of right now” – is also an important theme; whether or not you believe that every action has an equal and opposite reaction, or that something good happens for every bad thing that occurs, it’s such a moving and powerful notion.

Overall, despite it’s overwhelming strangeness, I did enjoy The Good Luck of Right Now. I can’t wait to see what quirky story Matthew Quick comes up with next.

In addition to the P-38, there are four gifts, one for each of my friends. I want to say good-bye to them properly. I want to give them each something to remember me by. To let them know I really cared about them and I’m sorry I couldn’t be more than I was—that I couldn’t stick around—and that what’s going to happen today isn’t their fault.

Today is Leonard Peacock’s birthday. It is also the day he hides a gun in his backpack. Because today is the day he will kill his former best friend, and then himself, with his grandfather’s P-38 pistol.

But first he must say good-bye to the four people who matter most to him: his Humphrey Bogart-obsessed next-door neighbor, Walt; his classmate Baback, a violin virtuoso; Lauren, the Christian homeschooler he has a crush on; and Herr Silverman, who teaches the high school’s class on the Holocaust. Speaking to each in turn, Leonard slowly reveals his secrets as the hours tick by and the moment of truth approaches.

In this riveting book, acclaimed author Matthew Quick unflinchingly examines the impossible choices that must be made—and the light in us all that never goes out.

Forgive Me, Leonard Peacock is heartbreaking from the start. The writing is angsty and, at times, downright depressing. Leonard is initially a difficult character to empathize with, though your heart will certainly break for him as he hands out gifts his four gifts and reveals bit by bit what led to this decision.

The story is slow to build, showing us just how intelligent Leonard is – and how different from his peers. He has an immense feeling of loneliness and is desperate to see that the future holds happiness and something truly good. This desperation is perpetuated by the unhappiness of the adults in his life: his absentee father with drug and alcohol problems, his mother who prefers working to spending time with her child, and the adults that he sees on the train who are headed to work and dislike their jobs.

Through the relationships that Leonard does have – his favourite teacher, his Humphrey Bogart-obsessed neighbour, a violinist at his school, and the pastor’s daughter that he met at the train station – we’re shown a different side of him. One that might just have a reason to keep on living. I particularly loved his relationship with Herr Silverman, as he’s the kind of teacher that every teen should have.

This story is interspersed with letters from the future that Leonard had written to himself. While this shift in perspective threw me off at first, I quickly grew to love the idea – and the feeling of hope that it brought.

Forgive Me, Leonard Peacock is a powerful and important book that everyone should read. I have a feeling that it will stay with me for quite a while.

Thanks to Netgalley for providing me with an advanced copy of this book in exchange for an honest review.

Amber Appleton lives in a bus. Ever since her mom’s boyfriend kicked them out, Amber, her mom, and her totally loyal dog, Bobby Big Boy (aka Thrice B) have been camped out in the back of Hello Yellow (the school bus her mom drives). Still, Amber, the self-proclaimed princess of hope and girl of unyielding optimism, refuses to sweat the bad stuff. But when a fatal tragedy threatens Amber’s optimism–and her way of life, can Amber continue to be the rock star of hope?

With an oddball cast of characters, and a heartwarming, inspiring story, this novel unveils a beautifully beaten-up world of laughs, loyalty, and hard-earned hope. The world is Amber’s stage, and Amber is, well…she’s sorta like a rock star. True? True.

Amber Appleton is definitely a rock star, no “sorta” about it. True? True. She’s incorrigibly optimistic and hopeful, despite the less than ideal circumstances that life has thrown at her. She cheers up the elderly, rescues stray dogs, helps Korean ladies learn English (and how to embrace their inner diva) through song, and befriends a war veteran who has little interest in socializing, all the while encouraging them with her seemingly endless stream of positivity.

The secondary characters are just as amazing, and I can’t decide which ones I liked the most: BBB, who is quite possibly the coolest dog ever; Joan of Old, whose goal in life is to make Amber cry; Private Jackson, a war veteran who expresses himself through haikus… they were all so wonderfully crafted and unlike any I’ve read before.

Most importantly, this book is honest in its portrayal of the world. Death and alcoholism are portrayed in such a real way, with no sugarcoating or softening of the blows that they inflict upon the characters (and the reader). It also raises some very interesting questions about life, faith, and hope. It questions why bad things happen to good people, while acknowledging the truth that we don’t know the answer to that question and that we probably never will. It affirms that one person can inspire others, and reminds us to have faith in the goodness of the world itself and the people inhabiting it.