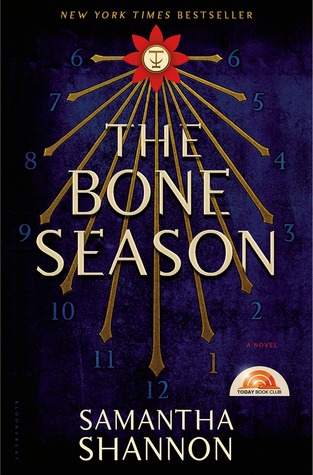 It is the year 2059. Several major world cities are under the control of a security force called Scion. Paige Mahoney works in the criminal underworld of Scion London, part of a secret cell known as the Seven Seals. The work she does is unusual: scouting for information by breaking into others’ minds. Paige is a dreamwalker, a rare kind of clairvoyant, and in this world, the voyants commit treason simply by breathing.

But when Paige is captured and arrested, she encounters a power more sinister even than Scion. The voyant prison is a separate city—Oxford, erased from the map two centuries ago and now controlled by a powerful, otherworldly race. These creatures, the Rephaim, value the voyants highly—as soldiers in their army.

Paige is assigned to a Rephaite keeper, Warden, who will be in charge of her care and training. He is her master. Her natural enemy. But if she wants to regain her freedom, Paige will have to learn something of his mind and his own mysterious motives.

The Bone Season introduces a compelling heroine—a young woman learning to harness her powers in a world where everything has been taken from her. It also introduces an extraordinary young writer, with huge ambition and a teeming imagination. Samantha Shannon has created a bold new reality in this riveting debut.

The Bone Season was one of my most anticipated reads of the year. The idea of clairvoyance was intriguing on its own, so when I heard that Samantha Shannon was being hailed as the next J.K. Rowling, this book moved all the way to the top of my to-read list. After being held captive by the world of Scion for an entire day (I really didn’t want to put this book down) I can certainly say that The Bone Season lives up to the hype that surrounds it.

The world of Scion is incredibly complex, intricate, and imaginative. As a result, the first quarter of the book is dedicated to setting up this world and the order of the clairvoyants within it. It’s so detailed that can be quite overwhelming – to the point where there’s a glossary located at the back of the book to explain some of the British slang and terminology used throughout the book. There is also, thankfully, a chart of the seven levels of ‘voyants, which I referred to countless times throughout my read. Thankfully, this world is every bit enthralling as it is complex, so I never felt bored while reading the more “info-dumpy” bits; in fact, this information made me want to dig deeper into Scion’s history and learn even more about the world that Shannon created.

Almost all of the characters in The Bone Season were very well-developed and each had a distinct voice. Paige was a wonderful heroine. She was very human: despite her dreamwalking gift, she was flawed and made mistakes, which allowed her to grow as a character. Her gang, the Seven Seals, didn’t receive a lot of page time, however thanks to the flashbacks that were inserted throughout the story, their ambitions and personalities were slowly uncovered. The only character who I don’t know very well is Warden, Paige’s keeper. He remained mysterious and aloof throughout the book, and I still don’t have a grasp on his motivations or intentions. While that makes things interesting (and leaves me eagerly anticipating the sequel) it made it difficult to connect with Warden.

Overall, The Bone Season was an imaginative debut filled with an intriguing premise, intricate world-building, and an addictive plot. Although the length and the slow start may be daunting, don’t give up – it’s certainly worth continuing. I can’t wait to see where Paige is headed next – in both the sequel, and the next six books in the series.