This week’s featured book is The Bully Book by Eric Kahn Gale. 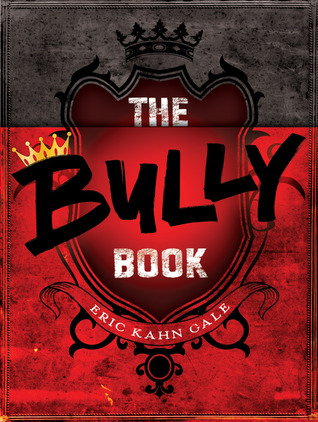 The rules governing middle school are often a mystery, but for Eric Haskins, they’re a mystery he needs to solve, and fast. He’s a normal, average kid, until sixth grade starts. For some inexplicable reason, the class bully and his pack make Eric the Grunt. Even his best friend since first grade turns on him. Eric can’t figure out why he’s the Grunt until he hears about the Bully Book, a cryptic guide that teaches you how to “make trouble without getting in trouble, rule the school and be the man” and how to select the Grunt-the kid who will become the lowest of the low.

Eric Haskins may be this year’s Grunt for now, but he’s determined not to stay at the bottom of the social ladder forever. Hilarious and compelling, The Bully Book is a must-read for every tween, tween parent, librarian and educator!

Although it’s a middle grade read, The Bully Book is for everyone as it covers a wide range of issues – bullying, peer pressure, the bystander effect – in an interesting, powerful, thought-provoking manner. I may have picked it up for Team Starkid, but I definitely kept reading for the captivating storyline.

Top Ten Tuesday is a weekly book meme created and hosted by The Broke and the Bookish. Every week she posts an idea for relating to books, and encourages other book bloggers to respond with their own “top ten” list.

The Book Thief by Markus Zusak / Code Name Verity by Elizabeth Wein
These books are thought-provoking, heartbreaking, and honest accounts of World War II. They may be works of fiction, but they’re just as impactful as The Diary of a Young Girl by Anne Frank.

Paper Towns by John Green / Every Day by David Levithan
Paper Towns reminds us that loving the idea of a person can be dangerous; we should love people for who they truly are, not for who we envision them to be, which is a lesson that everyone could benefit from learning.

Every Day teaches a very similar lesson: we shouldn’t judge people based on their appearance; instead, it’s what’s on the inside that truly counts. I’m not sure if it would appeal to the guys very much… so if not, they can always just read Paper Towns.

The Hunger Games by Suzanne Collins / Uglies by Scott Westerfeld
These books are more accessible to students than Brave New World or 1984, but they still contain many of the same important ideas as the dystopian classics.

The Perks of Being a Wallflower by Stephen Chbosky
Many high school students face the same problems as Charlie and his friends, making it a book that’s easy to relate to and easy to learn from.

The Sky is Everywhere by Jandy Nelson / A Monster Calls by Patrick Ness
These books hold so many important lessons about life and loss. They’re both so different from one another, which is good; after all, the grieving process is different for everyone and there’s no “right” way to do it.

Before I Fall by Lauren Oliver
Before I Fall shows the power that our actions and our words truly hold. It caused me to reevaluate some of my life choices, so hopefully it would remind students that they should think before they act – after all, we aren’t all lucky enough to get a second chance.

Forgive Me, Leonard Peacock by Matthew Quick / The Bully Book by Erik Kahn Gale
Forgive Me, Leonard Peacock is heartbreaking and deals with heavy subjects, but is a story that everyone needs to hear. Bullying is a problem that a lot of people ignore until it’s too late — until someone is pushed over the edge like Leonard is. I’d also hand out copies in the staff room, since the well-meaning Herr Silverman, who actively takes an interest in his students’ lives, is the kind of teacher that every teacher should have as a role model.

I know that it’s a middle grade read, but The Bully Book is incredibly important. It examines why the “grunts” are chosen to be bullied, the effect of bullying on the victims, the bystander effect, and peer pressure. Since bullying is (unfortunately) a reality in many schools, the powerful and thought-provoking message that The Bully Book holds would hopefully make a difference in at least one student’s life.

Extra Credit: read more books! I’d be happy to provide a list of my favourites in hopes that it would inspire more students to read for pleasure. Of course, this list would include the Harry Potter series, Shadow and Bone, and Throne of Glass, so there’s really no excuse for them not to become voracious readers.

Which books would be on your required reading lists?

I stumbled across this 30 day book challenge by The Chronicles of Radiya and decided to give it a try. Hopefully it will lead to 30 consecutive days of blogging that liven up the blog a bit and give us a chance to get to know each other a little better.

I’m awful at answering this question. There are a lot of books that I think are underrated, which I’ve featured in my Saturday Showcase posts… but here’s one that I feel that everyone, young or old, would benefit from reading.

I only picked up The Bully Book because it was written by a member of Team Starkid, so I certainly never expected to enjoy it as much as I did. The Bully Book covers a wide variety of issues – the bystander effect, bullying, peer pressure – in a powerful, thought-provoking, and interesting manner. It may be a middle grade novel, but its message is something that everyone would benefit from.

What book(s) do you wish more people would read?