As you may have noticed, I’ve been fairly absent from the blog for the last couple of weeks. I’ve had such a busy month, and blogging kind of fell on the back-burner as a result of it. So, I’ve decided to show y’all what I’ve been up to!

I’m currently working as a front desk assistant at my university, and I absolutely love it so far! The majority of my job involves interacting with first year students who are living in residence – whether it’s answering their questions, signing out pool/ping pong equipment to them, or providing them with a spare set of keys when they’re locked out of their rooms at midnight (often in just a towel).

One of my favourite parts of the job, though, is the whiteboard drawings. At the beginning of each shift, we get to update our whiteboard to make it uniquely “us.” It’s supposed to be welcoming, inviting, and occasionally informational, and it’s always a lot of fun planning out what your next creation is going to be.

I’m also taking a few classes this term: biochemistry, French, and physiological psychology. They’re all really interesting so far (aside from biochem, since my prof isn’t the best), but between school and work, I’ve been kept incredibly busy! 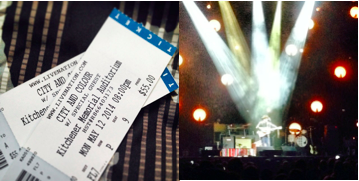 This month, I was lucky enough to see one of my favourite artists in concert: Dallas Green / City and Colour. It was one of the most perfect shows I’ve been to. 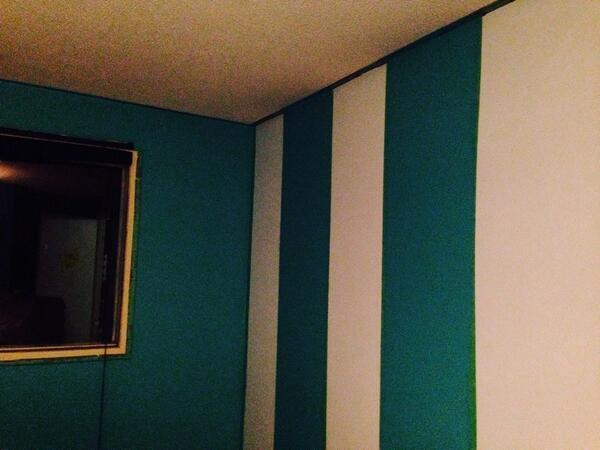 The majority of my free time, though, has been spent painting my house, and that picture is a preview of my newly painted room. There are only a few rooms left to paint, and it looks so much nicer than it did in September when my roommates and I moved in. I have managed to sneak in a bit of reading time (and even got a Waterloo library card!) so now that I’m getting used to balancing this heavy workload, there will hopefully be more bookish posts coming your way soon!

What have you been up to this month?

After seeing a few more personal posts, I realized just how much I love learning about the lives of other bloggers. As a result, I decided that I’d occasionally share a bit of my life with you in a new feature called “Life Outside the Page.” I’d really love it if you participated along with me — that way I can get to know all of you a little bit better! And, of course, if you have any requests as to what I should talk about in an upcoming Life Outside the Page post, those are always welcome! : )

When I was younger, I kept changing my mind about what I wanted to do when I grew up. I went through a phase of wanting to be a teacher, a squeegee kid (I honestly don’t even know how I thought that was a viable career option), and even a paleontologist (I blame my obsessive love for The Land Before Time). It wasn’t until I was given a chemistry set when I was about seven or eight that I realized that science was actually pretty cool, and after my puppy Wigeon had to be put down, I realized that what I wanted to do more than anything was to be a veterinarian.

Flash forward a few years to my high school biology classes. Between genetics, learning about the human body, and dissections, I found something that I was incredibly interested in learning more and more about. I applied to university (which was probably one of the most difficult and scary decisions of my life so far), was accepted everywhere I applied, toured so many campuses, and finally decided that I wanted to go to the University of Waterloo for biology.

I’m currently halfway through my second year there, and I absolutely love it! I’ve gotten to take a lot of really interesting courses, including zoology, and microbiology. Even though we weren’t technically supposed to, I took a few pictures of the lab components of these courses, since they’re easily some of my favourite parts of my university career so far — and not just because I have a neat tie-dyed lab coat.

On the left, there’s a petri plate containing some lovely pathogens. This one didn’t have too many on it, which was kind of a relief given that we had to count the ones on the plate to determine the number of colony forming units/mL of broth culture. On the right, there’s a picture of the starfish that I got to dissect first term last year. It was really neat seeing just how different these creatures are from us!

In third year I get to start my animal physiology specialization, which means that I get to take almost all animal-related courses for the rest of my university life. I won’t have to take any more chemistry or math… just biology and whatever electives I decide on and even more biology. I’m really looking forward to it!

Now it’s your turn: is what you’re studying/doing now the same or completely different from what you wanted to do when you were younger?

This weekend, I was lucky enough to attend the Gentlemen of the Road stopover in Simcoe, Ontario. It’s described as “a two day music festival that celebrates local people, food and culture, where everyone pitches in and everybody gets something back.” I had so much fun that I forgot to schedule a few posts for the weekend, so I thought I’d make up for that by showing you guys my weekend in photos (and hope that it’s enough to earn forgiveness for my negligence when it comes to posting).

This is what the tickets looked like! They were little passports, which you got to take around the fairgrounds and get stamped — it was quite a process and took both days, but it makes such a lovely keepsake!

My mom and I, after arriving in Simcoe for day one of GotR! Welcome Mumford, indeed!

The town was so cutely decorated for the stopover. There were handmade banners like this on almost every streetlamp, and there were moustaches and British flags everywhere!

The street fair was a lot of fun, too! The entire downtown area was closed off to make room for small stages, merchandise booths, booths manned by local businesses, and even some carnival rides.

The fairgrounds looked lovely! There were flags everywhere, the stage was nicely set up, and it was so well organized. I can’t imagine the amount of work that went into making it look like this, but it was certainly worth it.

I’m a huge indie/folk music fan, so I was incredibly excited about the music lineup. I got to see the following artists, all of whom were absolutely amazing:

There were way too many tall people standing in front of me to take many decent pictures of the bands at the fairgrounds, but here are the few that I did manage to take:

The boys in Mumford & Sons are such cuties, and they sounded SO good! They were so humble and gracious, and thanked the town of Simcoe for all of its support, which was a lovely touch. 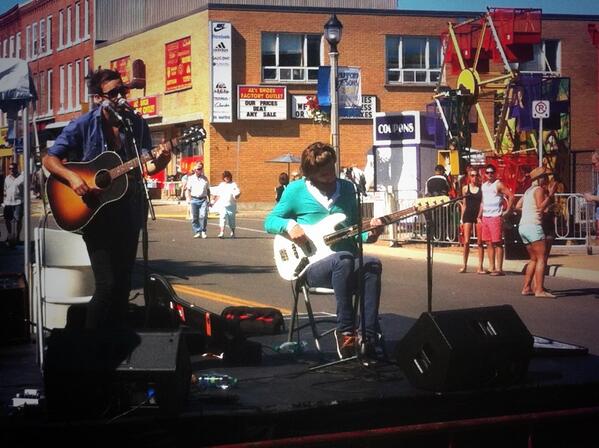 There was a smallish crowd to see Tim Chaisson play on the downtown stage, so I went over at the end of the show to introduce myself and tell him that his performance was really good. I was so excited about meeting him that I probably came across as awkward, but he still agreed to take a picture with me, so it’s all good!

All in all, it was such a fun weekend. The weather was perfect, the bands were amazing, the town was so supportive and welcoming, and Marcus Mumford was absolutely adorable (as always). I can’t wait for next year’s tour!